By Danni Stone - June 05, 2016
It takes some time to get used to being observed in the classroom. I'll never forget how anxious I was as a student teacher being observed by my visiting lecturers. If I found this daunting, I cannot imagine how I would feel putting recordings of my lessons up on Youtube for the world to see. Yet this is exactly what five teachers across the Manaiakalani cluster are doing.

On Friday we were visited by Matt Goodwin, who is one of the educators involved in Manaiakalani Google Class OnAir. He gave us the low down on the filming process and filmed part of our session using his filming equipment.  I could not believe that his lessons are uploaded directly from Google Hangouts to Youtube - particularly as the Youtube editor is quite simplistic. It must take a lot of courage to be part of this program! 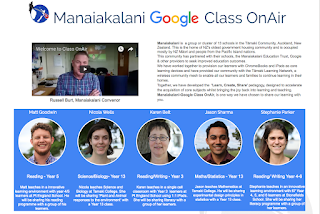 As we experimented with the option to upload a video taken on Google Hangouts to Youtube, it became clear that this could be used as a teaching tool. We are always discussing the possibility of creating rewindable learning for our Chromebook users, as the Explain Everything app allows for recording using the iPads. By using hangouts in this way, direct teaching or discussion could be recorded to support children when working with the concept at a later time.

As the recording can be uploaded as an unlisted video, I am also considering the possibility of using this tool to aid my reflections. Last term I managed to record a short segment of my teaching using an iPad, which I found incredibly helpful. I believe that recording a larger section of a lesson would be really beneficial for me as a beginning teacher.