Showing posts from November, 2016
Show All

By Danni Stone - November 21, 2016
It often isn't until you step back from a situation that you can truly examine it. After being given the opportunity to consider my first year during today's PLG, I realised how much my practice has altered since I began teaching. I have gained a far greater understanding of the Manaiakalani pedagogy and have enacted it increasingly over the year. I have felt my create tasks become more purposeful and I feel confident using technology to enrich the students learning. My confidence has also grown throughout the year and I have become far more assertive. Although there are still many aspects of my practice that I would like to improve on, I can see that I have made a lot of progress and look forward to having my own class next year. Check out the video I made discussing how I use learn, create, share in my classroom: Danni Stone, MDTA from Danni Stone on Vimeo .
6 comments
Read more

Last Wednesday I spent the day as an Usher at Hoyts Sylvia Park. No, I haven't had a career change, instead I was helping out at the Manaiakalani Film Festival, where around a hundred student created movies were played in three theaters.  This was really exciting for the students of the 12 schools who participated, and their teachers as it was the culmination of the hours of hard work that goes in to creating a movie. These movies varied greatly, with Pokemon, the Olympics and Poi E being some of the favorite themes. The movies also used claymation, animation, stop motion, puppets, green screens and other special effects. Not only was it great to see the films at the cinema, but also wonderful to see all of the kids interacting and viewing the different movies through their blogs.  I was really proud to see my class' movie play on the big screen. We had a real job attempting to film it as our script writers had created quite an ambitious story! It took a few
Post a Comment
Read more 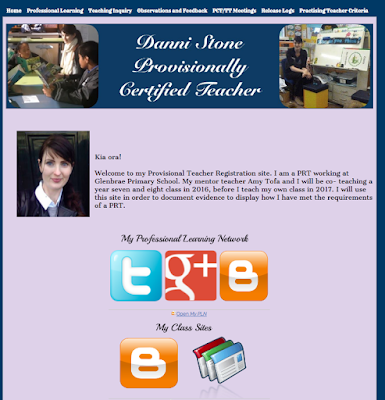 It can be a bit of a mission creating a PCT folder as a beginning teacher, but I have found my PCT Google Site far more efficient to use than an old ring binder! Once I set up my pages, I have found it fairly manageable to simply drop in digital reflections, observations, samples of student work and the like. In todays MDTA PLG we were given time and support to develop this website. I have followed the Manaiakalani template quite closely to create this site and have attached all of my evidence pages which can be accessed through the top bar. I have a page for each of the professionally certified teacher criteria and for other evidence of my practice such as my meeting minutes, reflections and release logs. Although the focus of this PLG was to ensure that this site was up to date, I found myself reflecting back on the year and considering some of the opportunities that we have been given. We discussed how much of our professional learning aligns with the criteria and I consider
Post a Comment
Read more
More posts