Showing posts from July, 2016
Show All

This morning I have been creating a Sketchnote in order to share my learning. Sketchnoting is a creative form of note taking that can be carried out in real time or after an event. It supports note taking as you are paring words and visuals in a structure that is easy to follow. When experimenting today I made a Sketchnote that summarised a discussion about how our students share their learning in the Manaikalani cluster. As I was sketching I did regret not planning my Sketchnote in advance as some of it was a out of order. I also created the whole thing on a very tiny piece of paper, which added to the difficulty of the sketching. However, I thoroughly enjoyed the sketching session and felt that it cause me to think quite carefully about my topic.  I can imagine myself using this when listening to lectures and completing academic readings. I can also see it engaging some of my learners and it would enable them to share and solidifying their learning in a creative manner.
2 comments
Read more 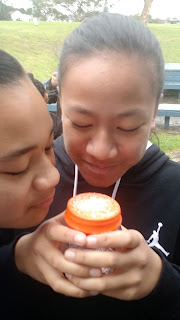 This week Room 7 have taken part in a couple of Science experiments with twists: the scientific concept that we were told that we were experiencing was not what was really happening. I conducted these as I wanted to encourage the students to think critically about the validity of references. On Tuesday we conducted an experiment called "Light vs Sound" where we blew up balloons filled with icing sugar and popped them to see if we would see the balloon explode before we heard it, as light travels faster than sound. However, when we are so close to an event like this, our brains cannot perceive the difference . Some of the students were sure that they heard the balloon first, while others were unsure. They were all interested to learn that the experiment was flawed and couldn't believe it was published in a book.  On Wednesday the students tried to see sound.  We created mini drums out of glass jars with balloons stretched over the top of them. We then placed sugar
Post a Comment
Read more 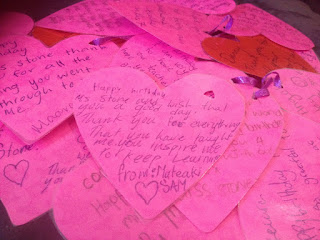 Birthday Wishes It doesn't seem that long ago that I was introducing myself to my class for the first time. I still remember how nervous I felt and how unreal it all seemed; I could barely believe that I was a real teacher. Now after six months of teaching it is surreal to look back and consider how much I have changed. I have learnt so much, become more confident and I have fallen more in love with teaching. At our Manaiakalani PLG we shared a highlight of our term with one another. For me, the highlight has been in creating more engaging lessons and activities for my learners. I have taken some risks in the lessons that I have taught (we took a few trips to the kitchen!) but I have thoroughly enjoyed them. Teaching procedural writing was my favourite unit this term as there were many opportunities for rich discussion and hands on activities. I introduced the topic by presenting my learners with some instructions to follow which required them to create electrical circuits.
4 comments
Read more 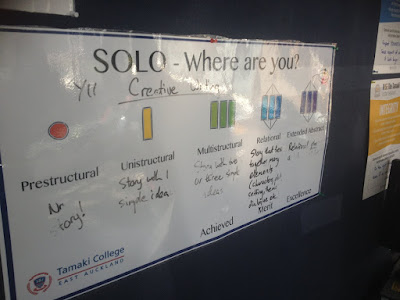 As soon as we walked through the gates of Tamaki College, I was struck by the realization that I know very little about how New Zealand Colleges operate and how NCEA is structured. As someone who completed Cambridge exams, I need to develop my knowledge of NCEA and prepare my students for this as oppose to the high school that I attended. Fortunately, we were given the opportunity to spend our PLG day looking at other schools in the cluster. I spent my morning with a year 9 literacy class (lead by Vaughan Spudle ) and was really interested to see how the class was run. I was especially impressed with the accelerated reading program that they ran as I could see the benefits it would have with some of my learners.  In this program the students spend 20 minutes a day reading a book that is appropriate to their reading level. After completing books, they take a short comprehension quiz to determine whether they are ready to read a book at the next level. The students were all engaged wit
5 comments
Read more
More posts