By Danni Stone - August 15, 2016
To start the term off with a bang,  Room 7 took part in a 'Breakout'. This meant that the students had to solve a series of clues in order to unlock a number of locks that were attached to a treasure chest.

I first found out about Breakout Edu at Sparkshop,  where Angela Lee facilitated a Breakout for the educators.  I thoroughly enjoyed this session and had been waiting to use this ever since. As Breakout can be used in any curricula area, I decided to use mine to recap some of our mathematics learning from term two.

I modified an established game; 'The Mathematicians Code' by Jeff Hennigar, so that it could be used by my whole class. I ended up using 6 locks on my main box and a smaller locked box which contained some clues.

To start off,  I presented the students with a picture frame that contained a picture of a Pythagorean tree. Some of the students realised that their had to be something more to this picture, and found a secret note hidden inside.

Hidden in the bookshelf was another clue, this time it was a quote by Pythagoras. Once the students worked out which word was missing from the quote they were able to remove the word lock.

The students also found a series of cups that contained a clue. Once they placed the cups in order it spelled out a word which lead them to find another key. 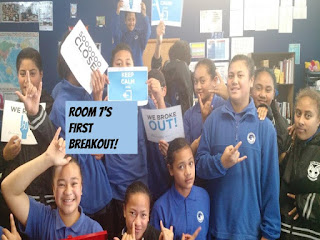 Another group of students found an ultraviolet light hidden in the bookshelf. They also found some 'blank' paper and realised that their was something written in invisible ink. This sheet was a key for the directional lock and the students solved a maths problem and converted it to the directions.

This was the last lock to be opened before the students claimed their prize. They finished with ten minutes left on the clock which was a great time.

Tips for breaking out