This year my inquiry has focussed on accelerating my students learning in reading and writing. I identified a real need in this area, as the Woolf Fisher data illustrated that our year 7/8 students were not making as much shift as they had in previous years.

During our mid year reports, my team collected writing samples from our students and met to identify what level our learners were achieving at. While I could clearly see that my students writing had improved when I compared this writing sample to the one that we conducted earlier in the year, I was still concerned with their levels and wondered if they had improved as much as I had first thought.

This weekend I decided to create a graph to compare my students beginning (blue) and mid year writing (red) results: 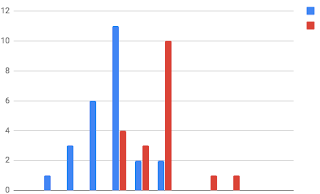 In term 1, my lowest student achieved a score of 1P, yet in their mid year writing sample the lowest score achieved was 2P. The average shift was 10 months and the graph illustrates that accelerated shift was achieved for my higher achieving students, as well as my target group.

I think part of this shift for my year seven students can be attributed to the fact that they changed from writing recounts to explanations at the start of the year. They had not written explanations before and their writing used the wrong structure, social language and it was not well organised.

When comparing my students writing, it is clear that as a whole the class are using better sentence, paragraph and essay structure. I have also noticed that their use of academic English is improving, which was one of my aims of using frequent exemplars and text analysis.

Have a look at an excerpt from one of my students texts in term one:
"If you don’t save money you could get into debt or you might not be able to afford things like food. Don’t speed it all at one time, Put money on the bank, Don’t buy things that you don’t need and do some chores to earn money. Buy cheap stuff, you can have a job that will pay you back, Don’t buy games just play outside, you can have a garage sale or you can gave the stuff you don’t need to shops and they will pay you back. You can save money by stop buying stars drunks. You need to save money for food, power, clothes and all the thing that you need you need money to pay the rents."

Compared to the middle of the year:
"A Upstander is someone who recognizes when something is wrong and acts to make it right, when someone is standing up for something that is right and do our best to help support and protect the person who is hurt. Nelson Mandela is a good Upstander because of what he did for everyone in Africa, Martin Luther King Jr is another great Upstander because he did the same thing like what Nelson Mandela did tried to get all racism to an end. "

I am really looking forward to seeing what the students create in their end of year tests!
Inquiry MIT2018 Teaching