By Danni Stone - April 19, 2018
As someone who regularly sends out Google Forms to elicit student voice (generally regarding student engagement and learning), I was eager to attend Jan Marie Kellow's session 'Digital Tools for Student Voice'. 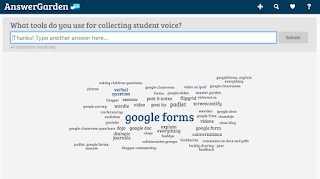 This session started by looking at the use of some of my favourite tools; Google Forms (which I use heavily), Answer Garden (which I tend to use to gather prior knowledge) or Padlet (which I use as a sharing tool).


We then looked at the use of Google Slides - which could be used similarly to Padlet, but with each child creating their own slide to respond to the prompt or question. While I do use Collaborative Google Slides, I had not thought of doing this before. At the same time, I use Google Draw pretty often, but I had not thought of using a collaborative draw in a similar manner to AnswerGarden. I quite like this idea as the students could easily save it to their drives and reflect on it in the future.

Some other ideas that I enjoyed were using My Maps as part of an introduction - identifying important places to the child and linking MyMaps to a Google Form. We also looked at Flipgrid - it is similar to Padlet in it's layout but it requires the student to record a short video response instead of text. Another free to use version of this is called 'Recap', which I am quite interested in investigating further.