By Danni Stone - March 01, 2018
Later in the MIT retreat we looked at the people involved in the issue and those that could support us to facilitate the approach. I created this diagram to represent those that are involved in my issue to support me to explore it in greater depth. 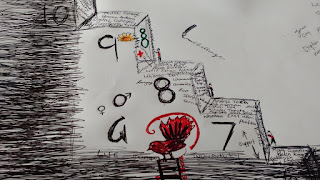 It was during the creation of this diagram that I realised how helpful it would be for me to discuss the issue with other educators - those teaching at year six, at intermediate, at the college and with Manaiakalani facilitators and senior management.

After unpacking the problem we were tasked with imagining different approaches that might address the issue. We had to create eight ideas to ensure that we were thinking broadly and widely (we could be as imaginative as we liked).


From creating these possible approaches it became obvious that a link between college and intermediate might not help my year sevens, although it might make life a little simpler for the year eights as they transition, it does not directly address the issue. Instead, looking at ways to build the students engagement or to integrate the subjects may be more useful. Lenva shearing noted how isolated some of the subjects can be and how much more useful it could be to integrate the topics - to make them seem more purposeful. It would be simple enough to integrate reading and writing and I see it as a potential next step for my inquiry.
Create Digital MIT2018 PT England